Originally published on the PayPal Engineering blog. Republished here with minor modifications and updates. If you find these sorts of systems interesting and know some security, too, consider working with us!

Everyone assumes all software engineers are great with numbers. If only they knew the truth. How many people's phone numbers can you recite? No peeking and emergency numbers don't count! Don't worry if you couldn't name that many. Here's the real embarrassing test of the day: How many sites' IP addresses can you name? No pinging and local subnets don't count! 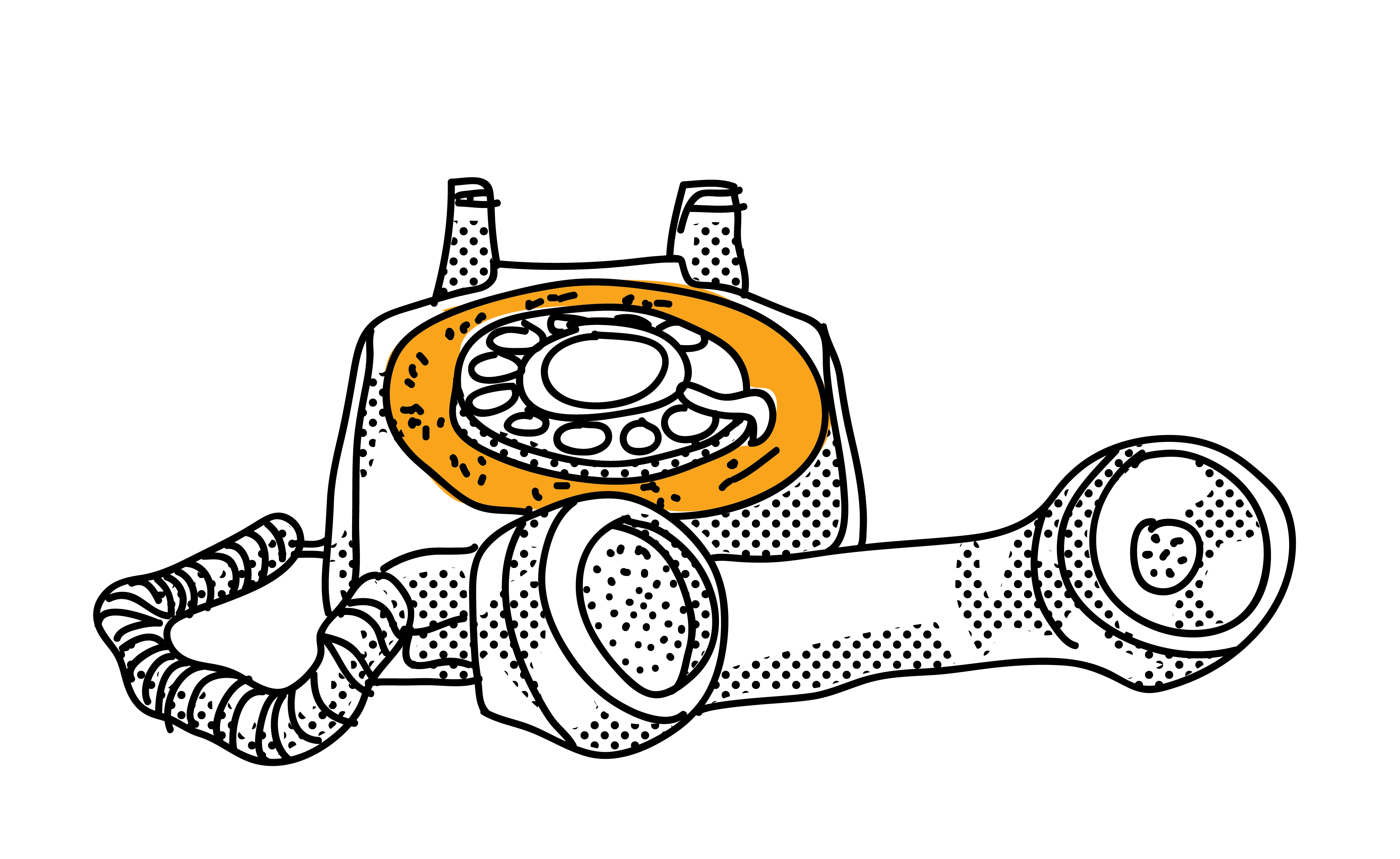 Most telephones still looked like this when DNS was invented. Not pictured: the phonebook.

Back in the mid-1980s, the first Domain Name System (DNS) implementations started putting our IP addresses into server-based contact lists and the Internet has never looked the same since. These days, we may associate DNS with large-scale networks, but it's important to remember that DNS really came from a very human distaste for numbers. Thirty years later, we engineers use it so much in normal Internet usage that it's easy to take for granted.

DNS may be a mature, but the fact of networks is that it always takes at least two to tango. As new technologies and deployments emerge, the implications of integrating with DNS must still be revisited. Your datacenter is not the Internet, even if it's in the cloud. This post looks at how to resolve a few of the DNS pitfalls preying on precious reliability and performance.

The client side of DNS, resolution, is virtually all UDP. This is interesting because UDP is designed as a lightweight, unreliable transport. However, in many of the most common use cases, DNS calls precede TCP-backed HTTP and other protocols based on reliable transports. This fundamental difference changes many things. Looking upstream, UDP does not load-balance like TCP. Because UDP is not connection-oriented or congestion-controlled, DNS traffic will act very differently at scale.

So our first lesson is to stay true to the stateless nature of UDP and avoid putting stateful load balancers in front of DNS infrastructure. Instead, configure clients and servers to conform to the built-in load-handling architecture of DNS. The Internet's DNS "deployment" is load balanced via its inherent hierarchy and IP Anycast.

Back on the client side, you can do a lot to optimize and robustify your application's DNS integration. The first step is to take a hard look at your stack. Whether you're running Python, Java, JavaScript, or C++, the defaults may not be for you, especially when working with traffic within the datacenter.

For example, while not supported here at PayPal, it's safe to say Tornado is a popular Python web framework, with many asynchronous networking features. But, silently and subtly, DNS is not one of them. Tornado's default DNS resolution behavior will block the entire IO event loop, leading to big issues at scale.

And that's just one example of library DNS defaults jeopardizing application reliability. Third-party packages and sometimes even builtins in Java, Node.js, Python, and other stacks are full of hidden DNS faux pas.

For instance, the average off-the-shelf HTTP client seems like a neutral-enough component. Where would we be without reliable standbys like wget? And that is how the trouble starts. The DNS defaults in most tools are designed to make for good Internet citizens, not reliable and performant enterprise foundations.

The hops Internet-connected applications make for you. It's no wonder the default timeout is 5000 milliseconds.

The first difference is name resolution timeouts. By default, resolve.conf, netty, and c-ares (gevent, node.js, curl) are all configured to a whopping 5 seconds. But this is your enterprise, your service, and your datacenter. Look at the SLA of your service and the reliability of your DNS. If your service can't take an extra 5000 milliseconds some percentage of the time, then you should lower that timeout. I've usually recommended 200 milliseconds or less. If your infrastructure can't resolve DNS faster than that, do one or more of the following:

Option #1 is purely a network issue, and a matter for network operations to discuss. For brevity's sake, option #2 is outside the scope of this article. But option #3 is the one we recommend most, because it is bureaucracy-free and relatively easy to implement, even with enterprise considerations.

When designing an enterprise application-level DNS cache, we must recognize that we are not discussing standard-issue web components like scrapers and browsers. Most enterprise services talk to a fixed set of relatively few machines. Even the most powerful and complex production PayPal services communicate with fewer than 200 addresses, partly due to the prevalence of load balancing LTMs in our architecture.

For our gevent-based Python stack, we use an asynchronous DNS cache that refreshes those addresses every five minutes. Plus, the stack warms up our application's DNS cache by kicking off preresolution of many known DNS-addressed hosts at startup, ensuring that the first requests are as fast as later ones.

Some may be asking, why use a custom, application-level DNS cache when virtually every operating system caches DNS automatically? In short, when the OS cache expires, the next DNS resolution will block, causing stacks without this asynchronous DNS cache to block on the next resolution. Our DNS cache allows us to use mildly stale addresses while the cache is refreshing, making us robust to many DNS issues. For our use cases both the chances and consequences of connecting to the wrong server are so minute that it's not worth inflating outlier response times by inlining DNS. This arrangement also makes services much more robust to network glitches and DNS outages, as well as allowing for more logging and instrumentation around the explicit DNS resolution so you can see when DNS is performing badly.

The overhaul wouldn't be complete without exploring one final scenario. What's it like to not use DNS at all? It may sound odd, given the number of technologies built on DNS in the last 30 years. But even today, PayPal production services still communicate to each other using a statically generated IP-address-based system, like a souped-up hosts file. This design decision long predates my tenure here, and for a long time I considered it technical debt. But after collaborating with architects here and at other enterprise datacenters, I've come to appreciate the advantages of skipping DNS. DNS was designed for multi-authority, federated, eventually-consistent networks, like the Internet. Even the biggest datacenters are not the Internet. A datacenter is topologically smaller, has only one operational authority, and must meet much tighter reliability requirements. 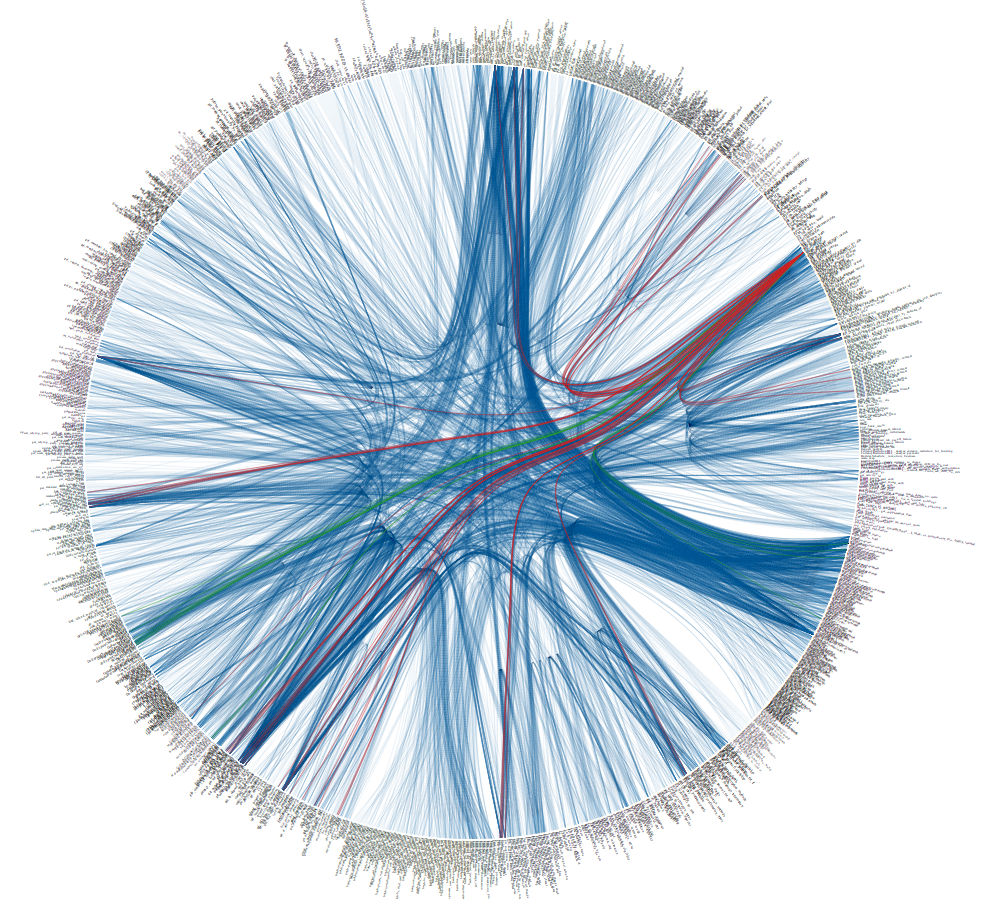 A little peek at PayPal's midtier-to-midtier traffic. Each shrunken line of text is a service endpoint. It looks like a lot, but each endpoint only talks to a few others.

Whether or not your system uses DNS, when you own the entire network it's still best practice to maintain a central, version-controlled, "single source of truth" repository for networking configurations. After all, even DNS server configurations have to come from somewhere. If it were possible to efficiently and reliably push that same information to every client, would you? Explicit preresolution of all service names reduces the window of inconsistency while saving the datacenter billions of network requests. If you already have a scalable deployment system, could it also fill the network topology gap, saving you the trouble of overhauling, scaling, and maintaining an Internet system for enterprise use? There's a lot packed in a question like that, but it's something to consider when designing your service ecosystem.

So, to sum it all up, here are the key takeaways:

If you're not careful, out-of-box solutions will fill your inbox with avoidable problems. Quality enterprise engineering means taking a microscope to libraries, with deliberate overhauling for your organization's needs.